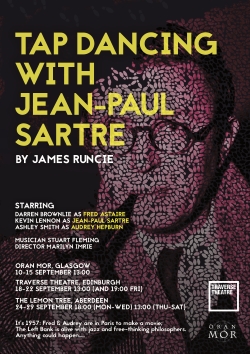 This is a musical comedy about existentialism. Fred and Audrey teach Sartre to tap dance and, in return, he teaches them the meaning of life.

It was directed by Marilyn Imrie and first performed at Oran Mór in Glasgow, the Traverse Theatre Edinburgh and The Lemon Tree Aberdeen in the autumn of 2018 with Ashley Smith, Kevin Lennon, Darren Brownlie and Stuart William Fleming.

It’s all charm … this gorgeous gem of a play

Runcie threads the quiddities of existentialism into the froth of a rom-com, lets his tap-talented cast cut loose under the canny direction of Marilyn Imrie. Singing is accompanied live by pianist Stuart William Fleming, ensuring that the sweet, swing-along meaning of life is doo-ah, doo-ah, doo-ah … Do go!